This blog is based around my experiences using Canon’s exciting 14mm F2.8L Mk II ultrawide prime lens, which was released in 2007. I don’t own this lens (yet) but I have spent quite a few days running around cities taking photos with rented copies. This blog is based around my impressions of this lens during that time. This blog isn't a technical review so I won't be talking about MTF curves or the like. There are plenty of other reviews out there to cover this. Also, given my experience with this lens is predominately urban photography, I'll keep the blog directed towards urban and architectural themes. If you like this blog and the photos in it, please share the link with other photographers who may be interested in ultrawide angle photography or feel free to leave a comment.

I have to admit that my relationship with this lens thus far has been a little love-hate. Don’t get me wrong, this is by no means a criticism of the lens. It’s simply that 14mm focal length is always wider than you think. The 14mm F2.8L Mk II lens is Canon's widest rectilinear lens and, at the time of writing, only the 8-15mm F4L and 15mm F2.8 fish eye lenses offer a wider field of view in the Canon lineup. Because of the very wide field of view, the lens sucks everything last bit of the environment into the frame like a supercharged vacuum cleaner. Photography, for me at least, is not just about what is captured within the frame, but also what is left out of it.  To that end, a lens fixed at 14mm is a powerfully creative yet, at times, enormously frustrating tool to work with. Despite this frustration  I've come to appreciate that the lens can produce some outstanding compositions when applied to architecture. For example, one of my favourite photos taken with this lens is shown above. It was taken at Melbourne’s Seafarer’s Bridge in the afternoon light.

Ultrawide angle lenses are generally classed as any lens with a focal length of 24mm or less on a full frame camera or 15-16mm or less on a typical crop sensor DSLR. Those familiar with ultrawide lenses know that composition is often challenging. I own both a 17-40mm full frame lens and a 10-22mm crop sensor lens. I have used both of these ultrawide angle zoom lenses extensively in the past and though that I would be quite at home with a focal length of 14mm. To my surprise, the extra few millimetres made a big difference. It felt as if I’d taken a large step backwards every time I looked into my viewfinder. There was always more in the frame than I could have ever imagined. Naturally, this sensation of stepping back also occurs when using my other ultrawide angle lenses but the effect on the 14mm just seemed so much pronounced. Perhaps the frame below will help to illustrate my point. It was taken at the Wheel of Brisbane, which is located at South Bank. I was quite literally underneath this giant wheel when I took the photo. I can remember thinking that the entire structure should only just fit into the frame.


Another example of the ability to compress the environment into the frame is shown below. This shot was taken at the RMIT Design  Hub building in Melbourne's CBD. I was standing in close proximity to the building when I looked up and took this shot. I had initially tried using my 24mm prime to take this shot but it didn't even come close to fitting the structure in.

By design rectilinear ultrawide lenses aim to keep straight lines straight, as opposed to fisheye lenses, which allow barrel distortion or “bulging out” of the image. Because ultrawide lenses have to compress such a wide perspective into a the scene without bulging there can be some apparent stretching, particularly in the corners of an image. In addition to this, rectilinear ultrawide lenses will show heavily converging lines when a shot is not taken level. This effect is known as "keystoning". Below is a photo taken under Brisbane's Victoria Bridge. The keystone effect is very noticeable in the buildings towards the edge of the frame.


It’s important to know that all of these characteristics of the lens are not design flaws but simply what occurs when you take a wide portion of the three dimensional world and map down it onto a flat, two dimensional frame. Having said this, lenses such as the Canon TS-E 17mm F4L, are a special type of construction know as "Tilt-Shift" and are able to correct the keystone effect whist still offering a wide field of view. The good news is that all of these characteristics can be used for dramatic and artistic effect, if you know how. One way I've found to take advantage of this effect is to look for curves. Because the lens offers such a dynamic perspective, getting really close to structures with sweeping curves can be very rewarding. Below are two shots illustrating this. The first is a shot of Clement Meadmore's sculpture "Dervish", in Melbourne's Southbank Precinct. Although it's not apparent to the viewer, I was actually hard up against the sculpture when taking the shot. The second shot was taken at Melbourne's Southern Cross Station (formerly Spencer St Station), looking directly up at the ceiling.

Another category of urban photograph that this lens excels at is tunnels, of any kind. The extreme perspective of 14mm really puts the viewer deep inside the scene. I've included two examples below, both taken at train stations. The top one was taken in Melbourne's Parliament Station. The bottom was taken in Brisbane's Central Station.

Canon's 14mm lens is able to provide a very close focusing distance and the effect that you get from close and extremely wide can be quite interesting. Below is a shot taken inside a cheap cup of coffee - two dollars in case you hadn't guessed. A world of creative possibilities opens up here. Mail boxes, fridges, in fact any suitably sized nook and cranny could become a photographic masterpiece. The one caveat is that the design of the lens means that the bulbous front element cannot accept filters and therefore must be exposed in order to take photos. If you're like me you don't tend to use an expensive lens without first fitting a UV filter on the front. Therefore the premise of walking around with an unprotected protruding front element is daunting, to say the least. I think it's something that one would have to accept and move on.  The lens has a permanently attached lens hood integrated into the design and this does help protect the front element from some, but not all, accidental knocks.

Perhaps another way to add interest to photos taken with this lens is to crop the frames into a panorama format. This will provide a quick easy ultrawide panorama, however be aware the resulting image will have much less resolution than the method of panning with a non ultrawide angle lens then stitching the resulting images together with software. The resolution may or may not be an issue, depending on what the end use of the photo will be. If it's going to be printed very large and hang in a gallery the lack of resolution may become obvious. However if it's just another photo in your web folio, it probably won't matter. Below is an example of a 3:1 panorama, cropped from a single photo taken with the 14mm lens.

Well if you've been paying attention so far, you'll probably have noticed that my shots have mostly been stopped down quite a bit. The reason for this was simply to ensure an adequate depth of field. I've tended to up the ISO to 1,600 before dropping the aperture too much. So I haven't really shown any shots so far that provide an indication of the quality of bokeh from this lens. You certainly can generate bokeh but you do need to be relatively close to your subject with the aperture fairly open. Below is a photo taken in this style. I think the bokeh here is generally smooth and adequte. Sure, it's no 85mm F1.2L Mk II bokeh, but to to be honest I can't see myself doing a lot of bokeh-centric  shots with this lens. I don't think that's the main intended use for a lens like this.

Now let's talk briefly about image quality. I said that I wouldn't be providing a "technical review" but let's face it, if you're going to throw thousands of dollars on a lens it's nice to know it's capable of sharp photos. I'm happy to say that both copies of the 14mm lens that I have tried have been very sharp. Below is the first photo in this blog with two inset regions showing 100% detail crops. Note that this photo has been processed, which has included some sharpening, but remember you can't pull detail out of thin air. When considering how wide this lens is, I think the sharpness is stunning. 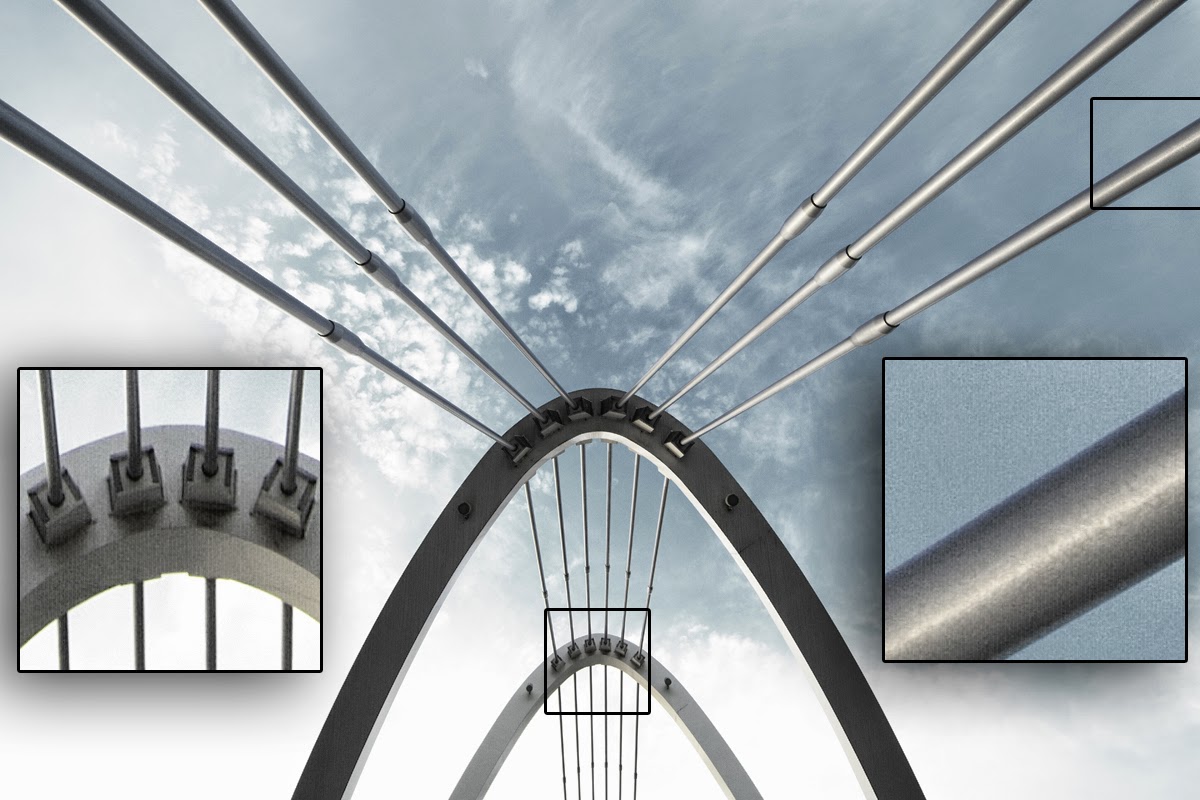 I'll finish off the blog by saying this. I had to choose to carry a single lens to go exploring a new city, the Canon 14mm would probably not be the one. There's no doubt it can creative stunning images and if I could carry a few lenses with me, I'd definitely be taking this in my bag. However the 14mm focal length is just too extreme to be used as my one and only walkaround lens. I would more likely reach for my 24mm F1.4L Mk II prime if I needed a general purpose wide angle lens for urban and architecture shots. I have herd rumors recently that Canon may bring out a 14-24mm zoom lens sometime in the future. If the image quality and distortion control were equal or better on such as lens I would be tempted to buy that lens instead, simply for the added versatility of a zoom. Having said all of that, would I recommend the Canon EF 14mm F2.8L MkII lens? Absolutely, without a doubt. It's not the cheapest lens around but the image quality and creative opportunities certainly make this a valuable asset in any camera bag.
Posted by Unknown at 21:48